Crafted in 100% solid Moso bamboo, one of the planet's most sustainable and rapidly renewable resources; the beautiful products contained in Greenington's Accent Collection bring the simple elegance of Mid-Century design into the modern home.

Minimal and modern, Greenington's versatile Rosemary side table offers a lot of function for it's small size. The open base allows easy access to pull the table close, and is a fun little accent table to hold your remote, snack, or even your laptop! Amber's rich finish is not a stain, but the color that is achieved through the process of cooking the sugars in the bamboo with heat and pressure. Let customers speak for us

An industrial table with a touch of glam. The gold rimed edge adds just enough elegance. It fits perfect with my decor. Would highly recommend. The shipping took a little longer than expected but it was worth the wait. 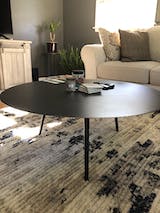 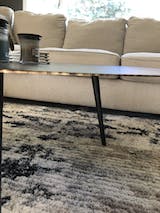 P
Terrazzo Side Table P.r.
Worth every penny for product and customer service

As soon as I saw the piece and the creativity with this table I knew I wanted it in my office but it’s even more stunning in person, made extremely well and came protected very well. It took some extra time to get ( probably no fault of the seller...just the times we're in at the moment). However, it was completely worth the wait and worth the price point. Pull the trigger on this one!

The piece is solid and great. The color is precisely what it looked like on the website. Very well made and beautiful. If I had one complaint, it is with the shipping company that Old Bones used. Updike Shipping was HORRIBLE. They texted me three times telling me to be home to meet the delivery people. I took the day off work. 30 minutes after they sent a text telling me they were on the way, they sent me a text telling me it wasn't coming. I called and spoke to a rude woman who said it was not her problem that I took the day off for nothing. They rescheduled it for a week later. This time they showed up within the noted time frame, however, they did not call to tell me they were on the way (they said they would call 30 minutes before). They didn't knock or anything. They simply left it in front of my house for someone to steel it! I walked out to get my mail and that was how I found it. If you order something from Old Bones (their stuff is great) tell them to use a different shipper or don't order it!

I knew so would like this piece when I saw it on the website. I wasn’t quite sure what Acacia wood was, but it looked beautiful and sleek. Once it arrive, oh my gosh! Incredible finish, the craftsmanship is outstanding. Worth every moment I spent finding it. It will be the statement piece in whatever room it’s placed!

Looks amazing! Thank you so much for taking the time and effort to write and send in a photo review. We appreciate you very much!